Aquatic Adventures at the Department of Commerce, 1932-2013 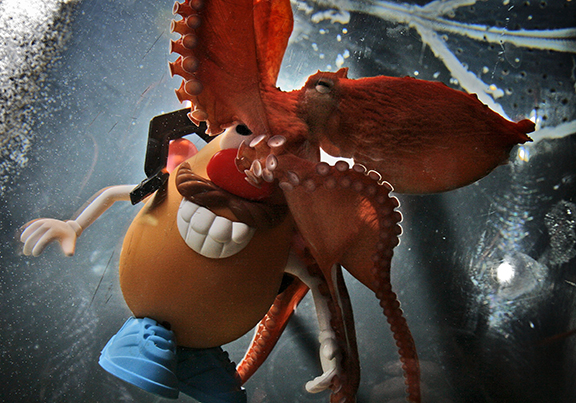 Finding a Home at the Herbert C. Hoover Building

In 1903, the Department of Commerce’s Bureau of Fisheries opened the first iteration of the National Aquarium in Washington at its offices on 6th St SW. The tiny aquarium housed a variety of freshwater fish whose visitors were primarily government employees. Calls for a larger National Aquarium that could serve as a major tourist attraction inspired the installation of an aquarium in the basement of the department’s new Herbert C. Hoover building on 14th St NW. The fish moved into their new home in the winter of 1932, after nearly being abandoned due to cost concerns in the midst of the Great Depression.

[Left] Feeding time at the National Aquarium in downtown DC. Pictured, Shania, the octopus, gloms on to a Mr. Potato head toy that has been filled with food (dead fish) and dropped into her tank at the aquarium. ~Photo by Bill O'Leary/The The Washington Post via Getty Images

The National Aquarium’s basement location could be difficult for visitors to find and faced competition from popular Washington attractions like the Smithsonian museums, but the aquatic exhibits called the Department of Commerce home for decades. Its occupants enjoyed an intensely loyal following and entertained generations of schoolchildren, Washingtonians, tourists, and even celebrities. 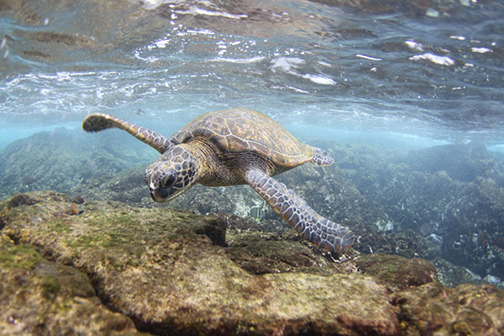 Reptiles like Spunky the Green Turtle were fan favorites at the aquarium.

The creatures who filled the aquarium varied from tropical fish to turtles to alligators, and even included a giant frog from Louisiana named Popeye, who was too lazy to catch his own food. The spoiled amphibian enjoyed hand feedings from aquarium staffers. Most of the residents were stocked from National Fish hatcheries, although others, like the beautiful Japanese carp who moved into their new tanks in 1973, were gifts from foreign dignitaries. The carp were a gift from a former Japanese Prime Minister to President Richard Nixon. Some denizens of the tanks were rare or endangered species, like the four blueback trout native to the Rangeley Lakes region of Maine who were brought to the aquarium with the help of Maine’s Rep. Clifford G. McIntire.

Many animals called the aquarium home for decades. Spunky, a 3 ½ foot green sea turtle, lived in Washington for 21 years before being relocated to a science center in Florida in 1990. The aquarium hosted a retirement party for Spunky, where children could win prizes for guessing the turtle’s weight.

The alligators were particular stars of the aquarium from the very beginning, attracting visitors and press attention. In 1932, three gators named Pay Cut, Furlough, and Dismissal had “free run” of the basement, and in 1941, another gator escaped its enclosure and remained at large for several hours. In 2000, five American alligators were donated to the aquarium to replace Gitcha and Gotcha, former residents of the gator tank who had become too big for the space and were being relocated to Florida. A naming contest was held for the five newcomers.

In 1983, the National Aquarium became a spot where visitors could learn and practice the Japanese art of gyotaku, or fish printing. Artists could take paint and a roller to a recently deceased fish and make a print to bring home. At least some of the subjects were among the unfortunate ranks of the aquarium’s stock who had leapt to their deaths.

“Clerks worked yesterday in the Commerce Building, unaware that a six-foot alligator—equally unconcerned—was roaming loose somewhere in the basement.”

In 2002, the National Aquarium welcomed conservationists Steve and Terri Irwin into their alligator tank. The famous Crocodile Hunter posed with the animals for several minutes, until a particularly irritable gator snapped at his shin. Irwin was untroubled by this inhospitality, reassuring The Washington Post’s Fern Shen in an interview outside the tank that being “bitten, chomped, nipped, [and] groped” was all a part of the job.

“My approach is to touch the masses. I’m not a scientist, but I am a conservationist. I want you right there with me in the bush. I want you to feel how important conservation is. Are you feeling it?” 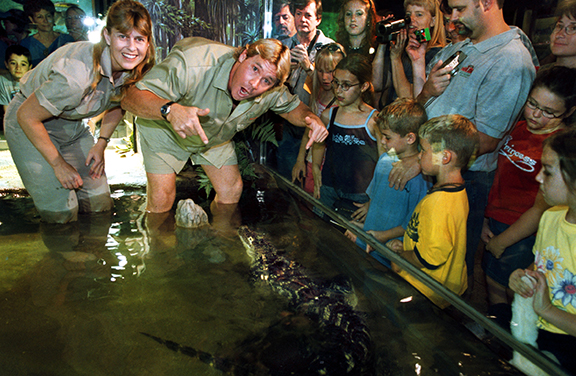 Steve "The Crocodile Hunter" Irwin and his wife Terri Irwin are at the National Aquarium in Washington DC to promote his latest movie. ORG XMIT: 126974
~Photo by Jahi Chikwendiu/The The Washington Post via Getty Images

Troubles for the aquarium began in the 1960s. A new National Aquarium in Washington was proposed and authorized in 1962, one that would be able to compete with modern, massive aquariums in places like Boston and Chicago. The concept for the new building was ambitious—one report called it a “strange combination of zoo and laboratory and circus.” Plans progressed quite far before the project was abandoned in 1971.

But eight years later, a massive aquarium was under construction just north of Washington, in Baltimore, Maryland. When it became clear that developers intended to call it the National Aquarium, an intense rivalry developed between the two facilities. Some argued that anything bearing “National” in its title should be located in Washington. Despite concerns that the days of the Department of Commerce aquarium might be numbered, the two attractions coexisted for years.

“They are bitter here, and they are worried that the shift of the “national aquarium” title signals the eventual closing of their operation.”

In 1981, the aquarium landed in hot water when the Reagan administration’s “budget-cutting sharks” slashed the aquarium’s $280,000 funding. The news came as a shock to those working at the aquarium and fans of the by then 108-year-old institution. Two dozen protestors gathered outside the Commerce Department, holding signs with messages like “Don’t let the National Aquarium flounder.” Locals argued that the numbers of tourists who visited were not important: the Aquarium was meant for the District, not for visitors. Others asserted that the modest tanks full of lively fish were more exciting than the static displays at the National Museum of Natural History. Still, the institution’s future seemed bleak.

Salvation came in the form of Commerce Secretary Malcolm Baldrige and his wife, Midge. Mrs. Baldrige organized a gala—Splash I—to raise money for the aquarium. Their Adopt-a-Fish program raised close to $100,000, and the National Aquarium transitioned from a government funded entity to one kept afloat by donations. This change resulted in the installation of a new entrance, allowing guests to visit without first having to go through the Commerce Building’s lobby.

The National Aquarium operated as a nonprofit entity for several years before closing its doors in 2013.

“To Commerce Secretary Malcolm Baldrige, they are the most comely fish in the world. They're all “affectionate,” he said, even the deadly lion fish from the South Pacific that looks more like a turkey with fins. “ And they all have character”.” 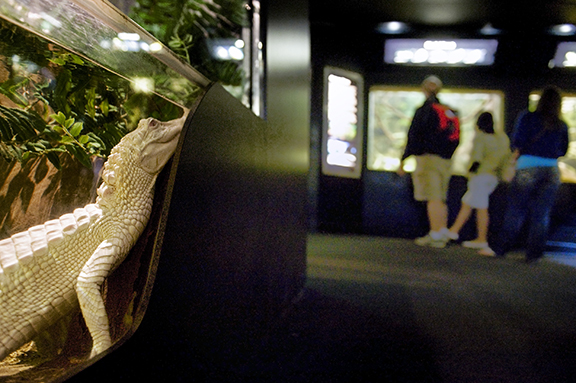 A rare albino alligator, left, has taken up residence with other scary fish just in time for Halloween at the National Aquarium on October, 05, 2011 in Washington, DC.
~Photo by Bill O'Leary/The Washington Post via Getty Images 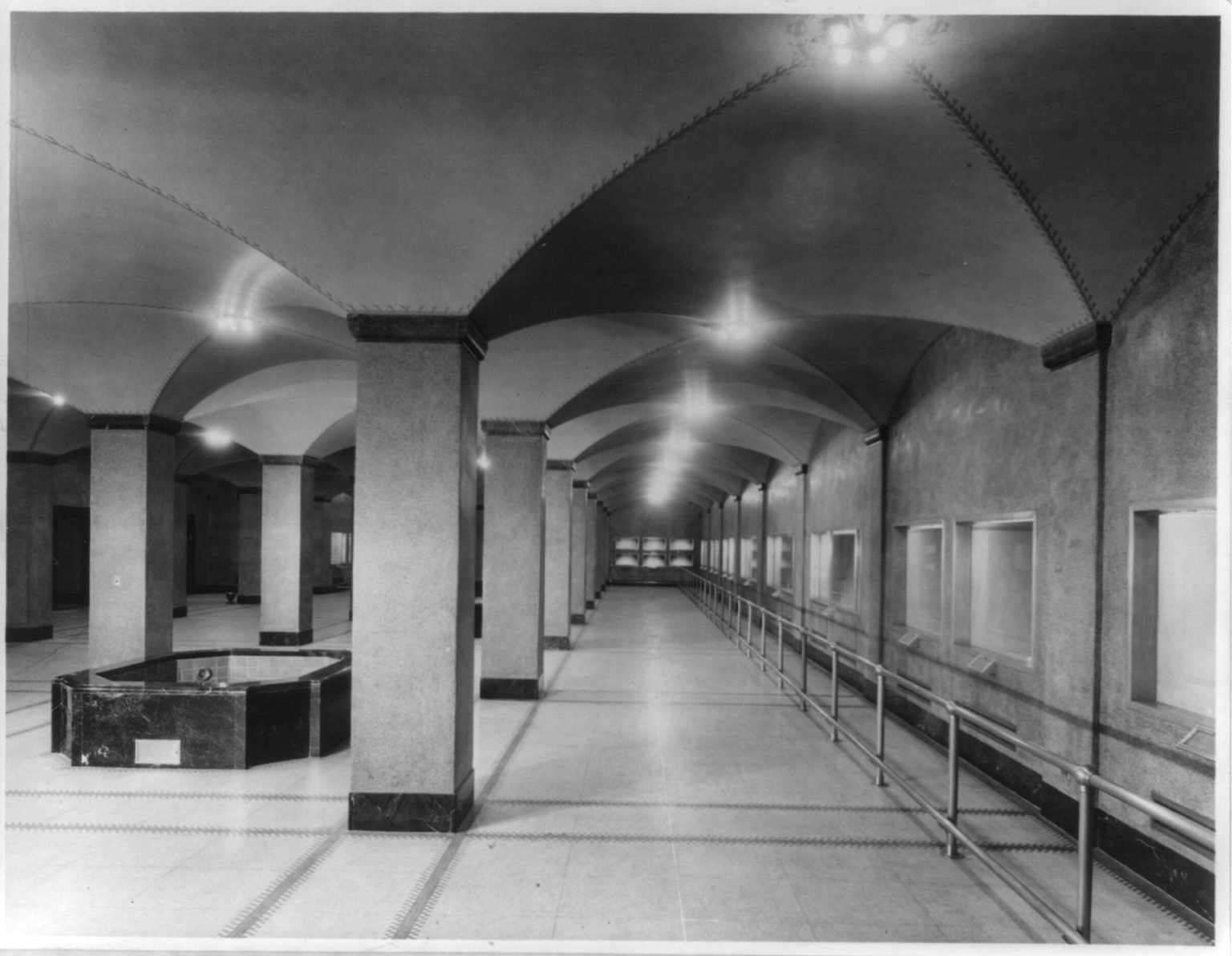 Although originally applauded for its sleek, dramatic interior, later renovations to the National Aquarium made the space more dark and austere.; 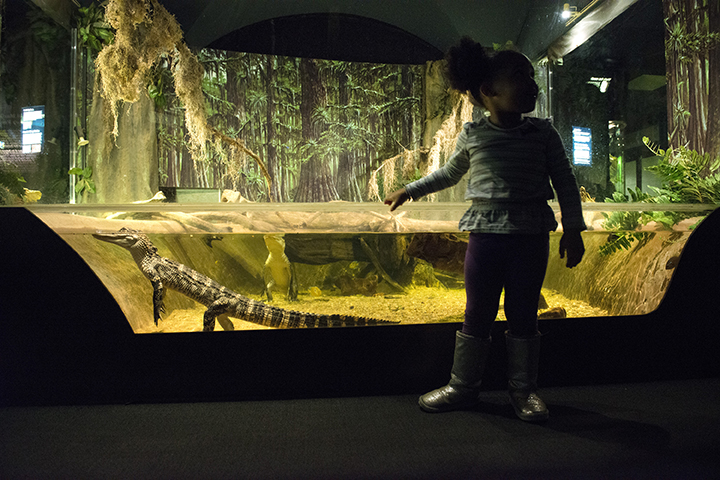 WASHINGTON, DC - SEPTEMBER 30: A small patron watches the alligators on exhibit the last day of the National Aquarium's DC branch in Washington, DC on September 30, 2013. The Aquarium resides in the basement of the Dept of Commerce building which is under renovation. As the Aquarium look for option of reopening in the DC area, the staff and animals are being relocated to various locations and agencies. So, its fate is yet to be determined.
~Photo by Linda Davidson / The Washington Post via Getty Images 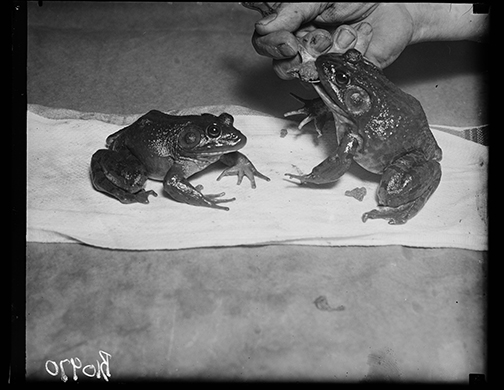 One notable resident was a giant frog from Louisiana named Popeye, who was too lazy to catch his own food and required hand feeding. 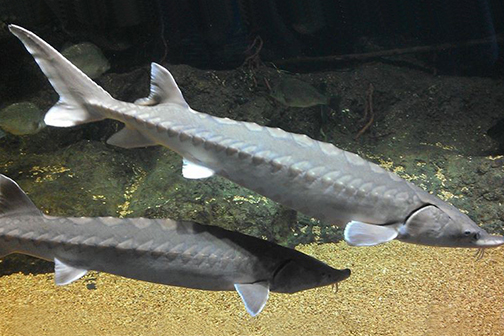 Spencer the Atlantic Sturgeon, like the fish pictured here, was another famous resident who lived in the early Bureau of Fisheries aquarium. When his fate seemed uncertain before the opening of the National Aquarium in the 1930s, concerned members of the public offered adopt him." 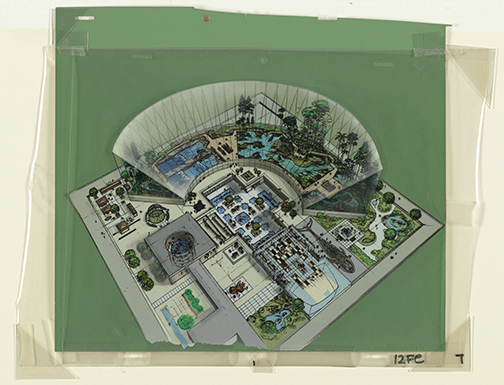 In the 1960s, a plan was put forth to develop a larger, permanent aquarium in Washington, DC, seen here. The ambitious project was eventually abandoned. 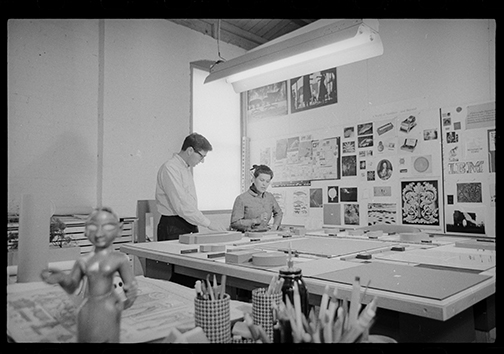 Designers work on a model for a new National Aquarium in Washington, DC. Plans for the new facility progressed far before the project was scrapped.