In 1932, when the construction of HCHB was complete, the building housed two libraries.  The seventh floor held the departmental library, and featured sprawling stacks directly above the staff area on the eighth floor that held materials related to many of the department's bureaus.  The north end of the first floor was occupied by the Patent and Trademark Office (PTO) and included two ornamental spaces:  the Patent Search Room (now home to the White House Visitor's Center) and the Patent Office Library, also known as the Reading Room of the Scientific Library.  Prior to 1932, the PTO was located in the Old Patent Office Building, today home to the National Portrait Gallery and Smithsonian American Art Museum. The 1932 move was a major undertaking and involved the transfer of more than 150,000 books.

The new Patent Office Library, “one of the finest scientific book collections in the world,” served as an important resource for PTO employees as they examined and approved or denied new patents.  Its collection of books, periodicals, and foreign patents were also widely used by inventors and their attorneys.  Between the adjacent Patent Search Room and Scientific Library they had access to approximately 8,000,000 United States and foreign patents.

The PTO underwent major changes in the early 1940's, starting soon after the United States entered World War II in December 1941.  To organize and support a major war effort, the government needed as much space in the nation’s capital as possible.  Several PTO units moved out of the Commerce Building and temporarily relocated to Richmond, Virginia, to clear space for war work. A few units remained behind, including the “searchroom, the scientific library, the patented files, the soft copies of patents.”  The PTO played an important role in the war effort, safeguarding the secrecy of defense inventions and reviewing new applications that might aid the military.

The Army also prepared the Commerce building to defend the nation’s capital during World War II, outfitting the roof of the building with machine guns.  The Army recruited agency employees to assist in defense operations.

By 1946 the war was over and the PTO began the process of moving all of its units back to the Commerce building.  The move took time and was accomplished piecemeal, and highlighted the complications the PTO experienced without full access to its library.  “One of the difficulties,” the Washington Evening Star reported, “is the fact that the examining divisions… will not have immediate access to the scientific Patent office library in the Commerce building, which is essential to their work.”

The return to the Commerce building reunited the PTO but the organization soon found that it had outgrown the space.   Faced with overcrowded and uncomfortable conditions, the PTO began moving all of its operations to a new facility in Arlington, Virginia, in 1967.

The PTO move took two years, but by late 1968 it was clear that the reading room area would not remain vacant for long.  The Department of Commerce Law Library, which at the time occupied a space on the seventh floor of the building, was slated to move in.  Writing in December 1968, American University law professor Stanley J. Bougas enthusiastically endorsed the shift, remarking that the reading room’s “high ceilings with the decorative murals lend a cathedral-like atmosphere that inspires an aura conducive to legal research.”  The Law Library move may have begun as early as 1971.

As part of the ongoing renovations to HCHB, by 2010 the Departmental Library on the seventh floor was merged administratively and physically with the Law Library on the first floor.  Today, the library is known as the Commerce Research Library, and serves all bureaus of Commerce (except PTO).  It's collections include materials in the areas of business, trade, industry, economics, legal and legislative, travel, technology, professional development, as well as materials published by and about the Department of Commerce.  The beautiful Reading Room is available for DOC staff to visit, work away from their offices, or enjoy a variety of library events. 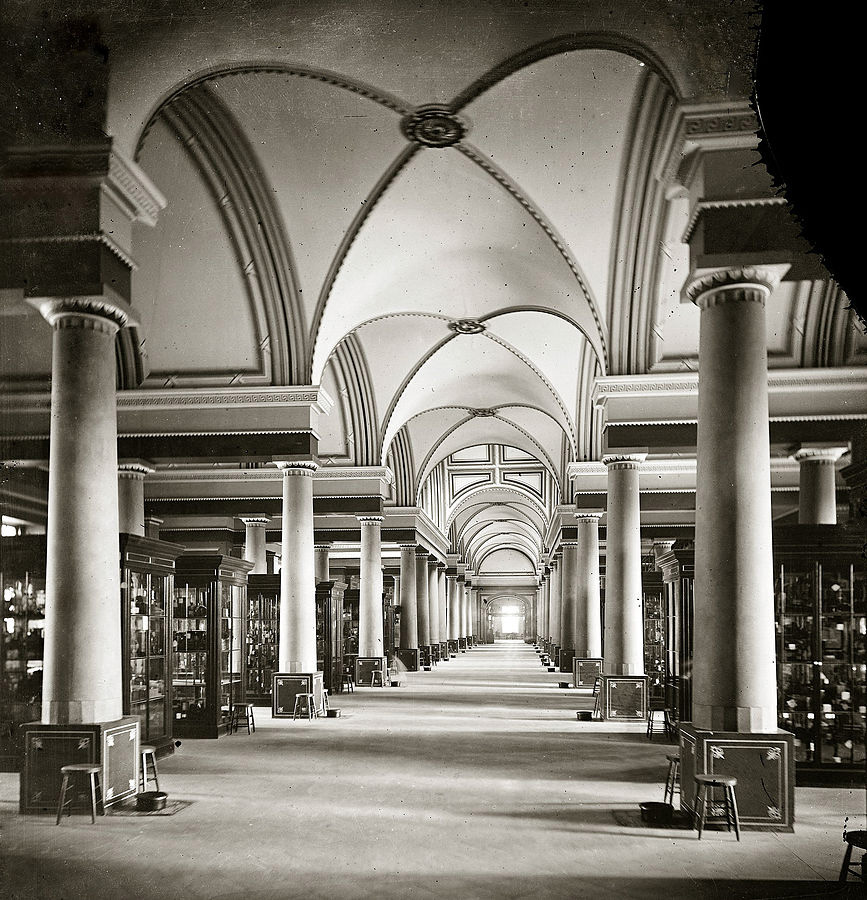 Before 1932, the PTO (and its library) was located in the Old Patent Office Building, today home to the National Portrait Gallery and Smithsonian American Art Museum. 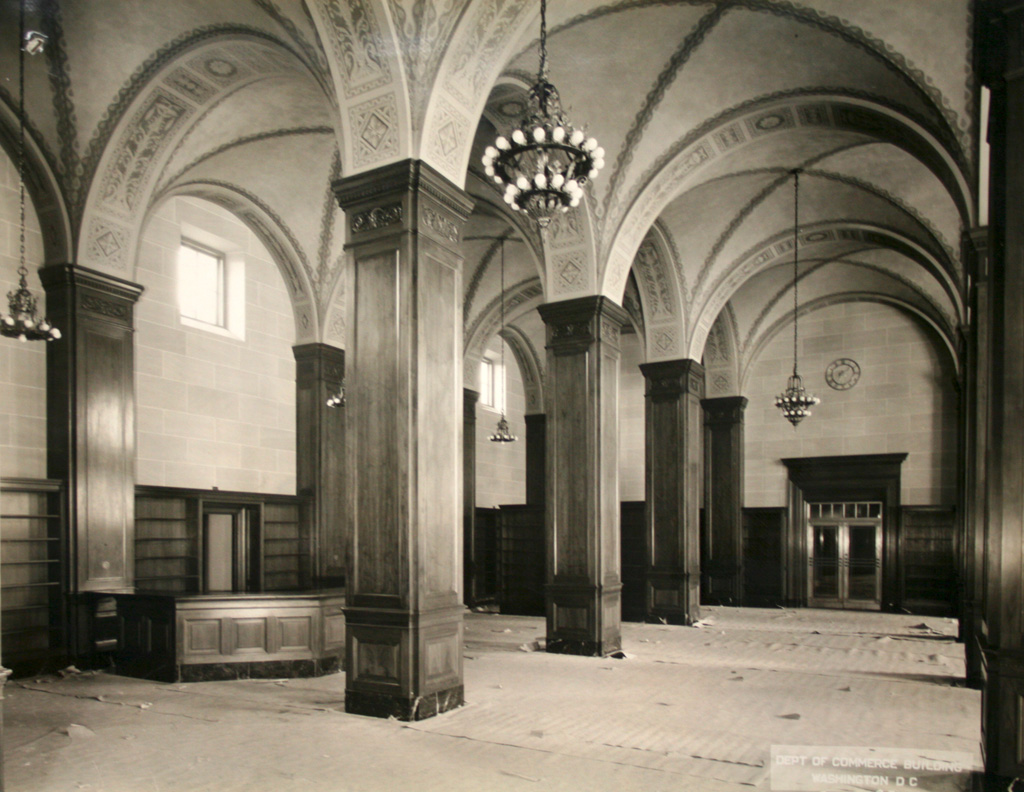 Reading Room Just Prior to Completion

This photo depicts the Reading Room in 1931, just before its completion. The Patent and Trademark Office (PTO) occupied the north end of the first floor, and this library space first housed the Patent Office Library, also known as the Reading Room of the Scientific Library. 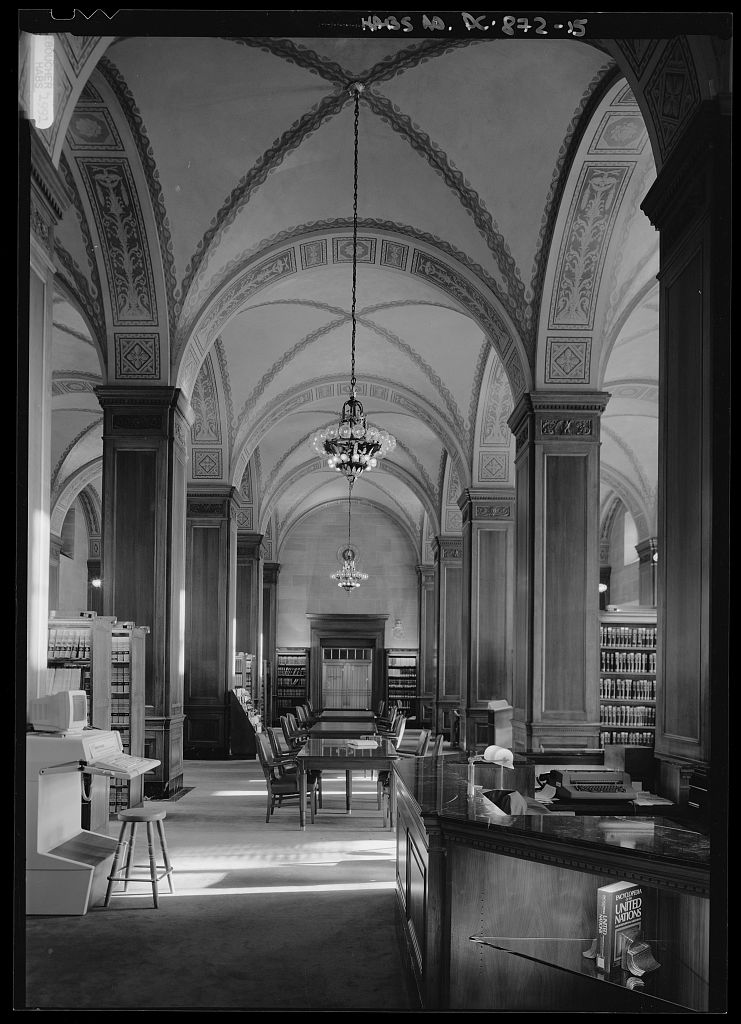 Note the computer workstation on the left! 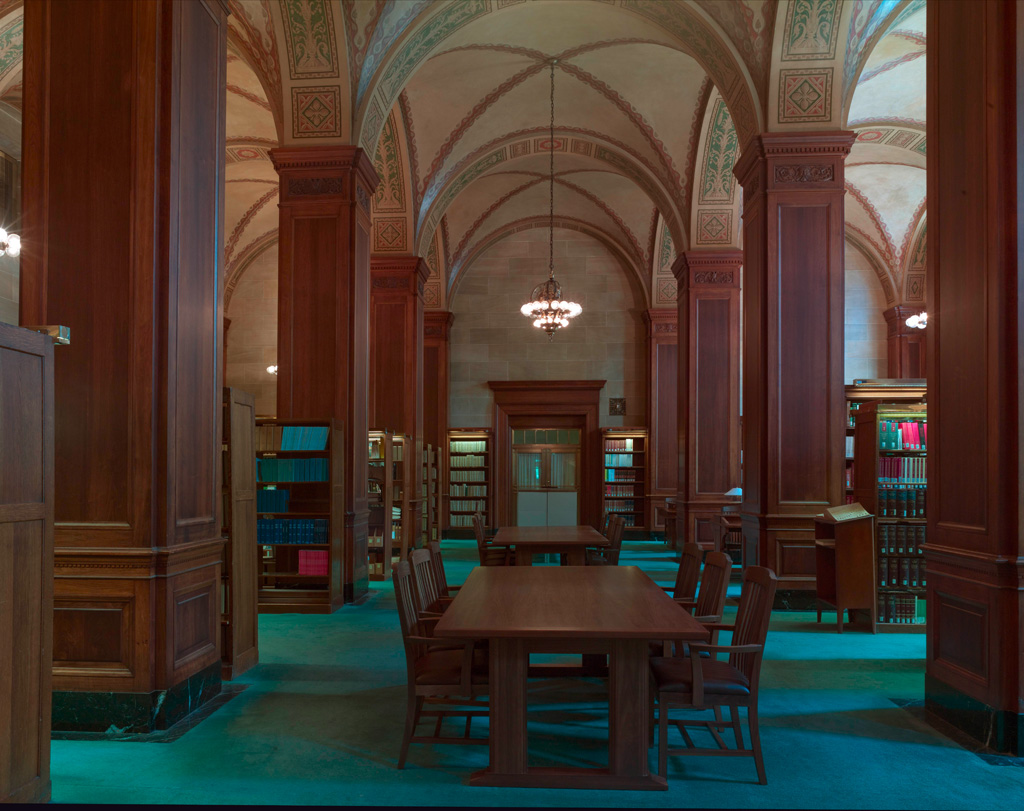 Before the current red carpet and modern technology!